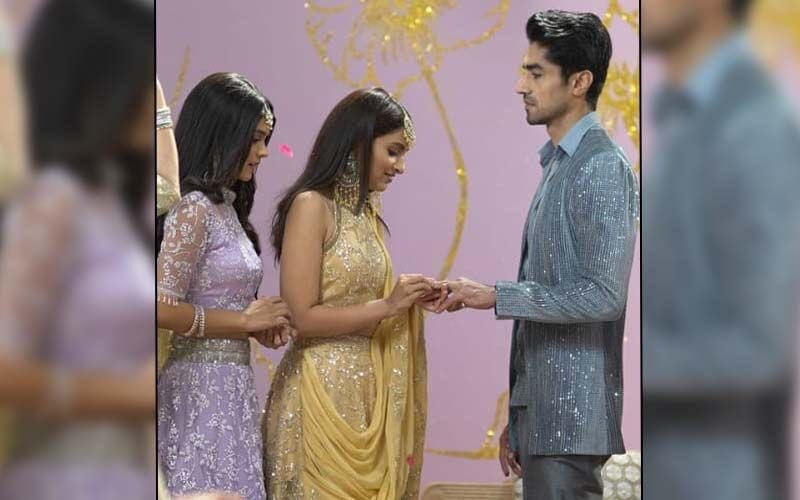 The Wednesday episode of Rajan Shahi’s “Yeh Rishta Kya Kehlata Hai” began with the Goenkas and Birlas dancing to “Bole chudiyaan”. Akshara couldn’t control her tears and left from there. Neil follows her and tells her that what she is doing is not right, but Akshara refuses to talk about it.

Later, at the time of exchanging the rings, they couldn’t find Abhimanyu’s ring. Akshara looks for it and finds it in the box itself. Abhimanyu unwillingly puts the ring in Aarohi’s finger and when it comes for his turn, they find that Abhimanyu’s ring finger is wounded. The family asks Aarohi to put it in his right hand.

The family then clicks some photographs and after that Akshara cleans Abhimanyu’s wound and puts a bandaid on it. They are both in tears and in pain, but Akshara asks him to remember that he is engaged to her sister now. Kairav sees them crying and looks worried.

In the upcoming episode, we will see that Kairav apologises to Akshara and tells her that she should not hide her feelings for Abhimanyu. He tells her that he will reveal the truth to the family. Meanwhile, Neil too tells Abhimanyu that he is not doing the right thing, and he will stop him from ruining his life. He goes to Manjari to tell her the truth. Will Akshara and Abhimanyu be able to stop them? To know what happens next, keep watching “Yeh Rishta Kya Kehlata Hai”.