WhizBliz
Home BTS World For the second time, ARMY arranges a special feature on the Burj... 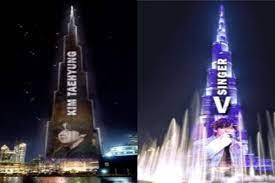 BTS is recognised for having an immense number of followers all over the world who shower the band with unending love and support. They have been dubbed one of the largest bands in the world. Fans of the band, known as ARMY, demonstrated this ahead of member V’s 26th birthday by organising a unique feature of the young vocalist that would be placed atop the world’s tallest skyscraper to commemorate the event. The elaborate surprise is being organised by Vbar, a fan group with the Twitter account @KIMTAEHYUNGBAR_.

This would be the second year in a row that the Burj Khalifa fans has planned a big surprise for their favourite artist. With only a few hours till BTS’ V’s birthday celebrations in Dubai, the entire fandom is humming with anticipation. The specifics of the surprise show may be found here.

The fan club revealed the spectacular surprise planned for V’s, actual name Kim Tae-hyung, 26th birthday on their Twitter account. The fan group requested the ARMY to keep an eye out for the event planned this year, sharing photos and footage from a similar surprise last year. “27th Birthday Support for Kim Taehyung Part.21 The Burj Khalifa,” they wrote. Kim Taehyung’s 3-minute birthday commercial on the Burj Khalifa for two years in a row is the only one in the world. Dubai time is 20:10 on December 29 and KST is 01:10 on December 30. Happy 27th (In Korean age) birthday, Inner Child by V.”

In the early hours of December 29, the world’s tallest structure will be illuminated with V’s images and music for three minutes. This year, the singer’s hit solo Inner Child was chosen by the public to be performed throughout the light display. It’s also worth noting that the young singer is the only idol on the Burj Khalifa who has two special light displays. The light show will be streamed live on Twitter by the fan groups.