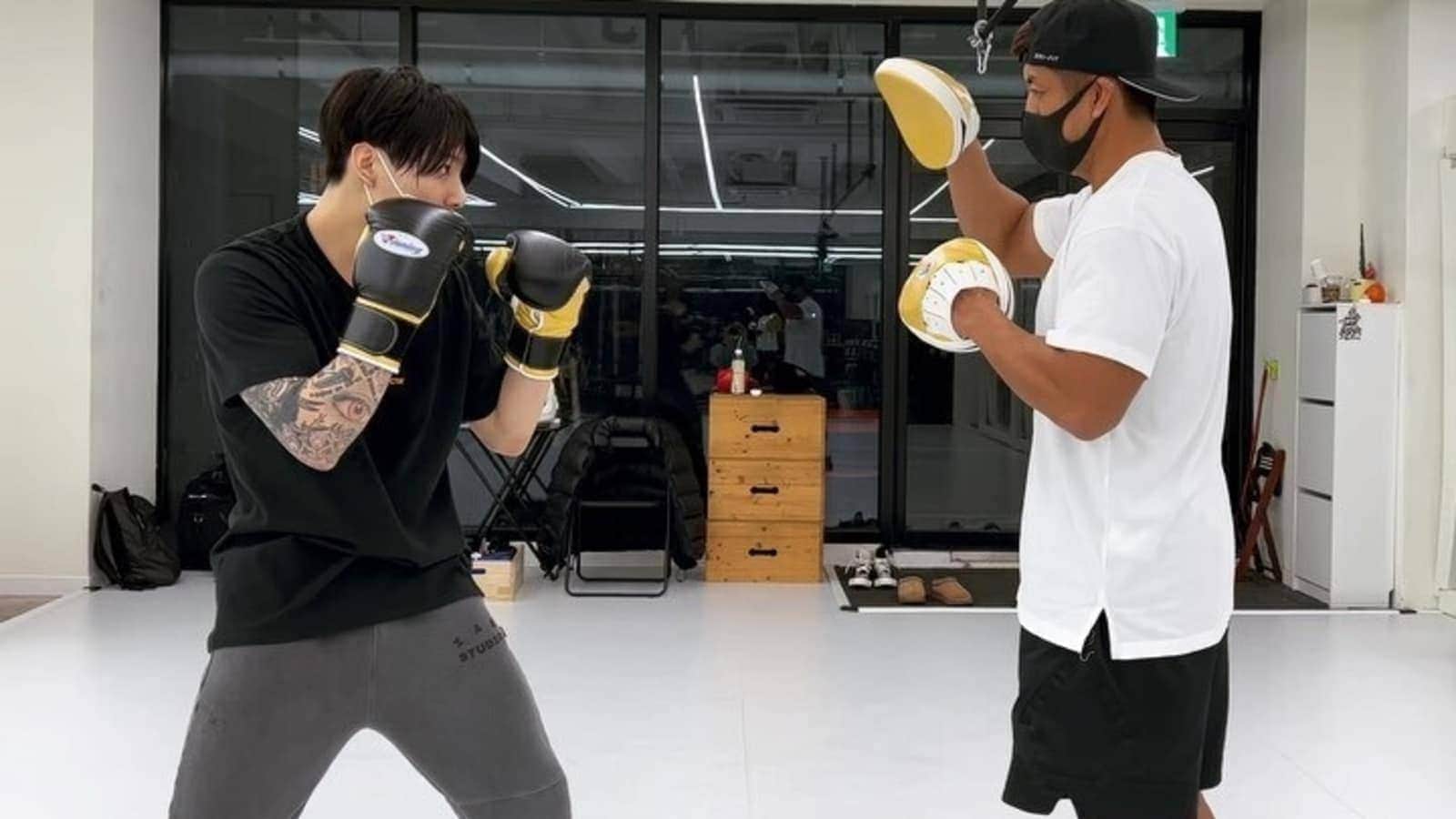 Jungkook, the youngest member of BTS, has released a new video in which he shows off his boxing talents. Jungkook shared a photo of himself boxing with his coach Tommy on Instagram on Tuesday, giving ARMY a sneak peek.

Jungkook of BTS is featured in the video wearing a black sleeveless T-shirt and matching shorts. He also hid his face under a white mask. “It’s difficult,” Jungkook remarked in Korean as he shared the video. Within five hours, the video had over one crore likes. Tommy retweeted the video with the caption “Sharp.”

BTS fans, known as ARMY, responded to the video on Twitter. According to a fan, “Another video of Jungkook boxing in a sleeveless shirt has surfaced (tee). I’m about to pass out!?” Another user added, “I’m sharing a collage of my boxing vids.” “We’re only halfway into 2022, and we already have another Jungkook boxing video!? I’m not sure we’ll be able to make it to 2022! JK is a complete idiot… Soon, you’ll be able to watch gym videos!”

Another fan tweeted, “Next thing you know, Yoongi is crafting a song to the beats of the punch.” As one individual put it, “The guy is well aware that his bare right arm will never be seen! Never! He enjoys teasing, though.”

“I’m grateful to Koo for not publishing the video with his tattoos on display and keeping our sanity intact,” another fan remarked. “Having said that, Koo is the coolest and I really love his body art.” “Jungkook, oh my God. He’s driving me insane with his enthusiasm!! “Remarked a fan.

Another fan commented, “Can they picture one day HYBE promoting #Jungkook as Korea’s official boxer would be an absolutely tremendous boom.” “Arms aren’t just any arms,” a Twitter user commented. “Jeon Jungkook’s arms have knocked out every army in the globe.” “Is this something I’m dreaming about, or did it truly happening? JK without sleeves? “Enquired a fan.

BTS member V was also seen in the video by a few fans. “The scarf, the height, the legs, and even the length of the jacket….absolutely it’s him,” a fan remarked with a screenshot of a person wearing a white jacket and blue denims.

Another individual stated, “Taekook, awww So Tae hung out with Jungkook? Is there any doubt that it was Tae who did it? It’s Kim Taehyung, that’s it.”

All members of BTS, including RM, Jin, Suga, J-Hope, Jimin, V, and Jungkook, are currently on a “extended time of rest.” BTS’ agency, Big Hit Music, announced the group’s hiatus last month, stating that it will allow them to “re-inspired and recharge with creative energy.”