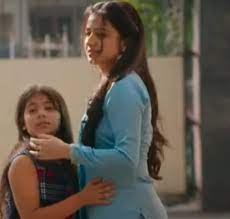 The Monday episode of Nilanjana Purkayasstha and Herumb Khot’s “Chikoo Ki Mummy Durr Kei” finally saw some good news for Chikoo. While Chikoo was leaving for the boarding school, Nupur stopped her. Kamini questioned her about it, when Nupur informed them that she got a call from the government office. Kamini thinks its the police who called her, but Nupur tells them that Chikoo is getting a bravery award.

She tells Chikoo that the government wants to reward her for rescuing the kids and also help them go back to their real parents. While Chikoo is excited about it, Mini asks Nupur and Milind why she is not getting an award because even she helped Chikoo. Milind tells her that she should thank Chikoo because she helped her in meeting her parents.

Nupur tells them that she will call a designer home so that Chikoo can select a few dresses for the event as well as the interview. But once they come, Mini selects some dresses for her, and fights with Chikoo over a bag. The bag gets damaged and the designer scolds Chikoo for this. Hearing this Milind and Nupur ask them to leave which leaves Mini upset. Mini tells Nupur and Milind that she doesn’t want them to be a part of Chikoo’s big day. They try to convince her but to no avail.

Later, Chikoo gets ready for the interview. But when the government officials come, Mini opens the door.

In the upcoming episode, we will see that Mini tells the government officials that Chikoo doesn’t live with them. On the day of the event, she locks Nupur in a room. Meanwhile, Chikoo’s name is announced at the stage and Nupur is worried that she had promised Chikoo to be with her. What will Nupur do? To know what happens next, keep watching the show.