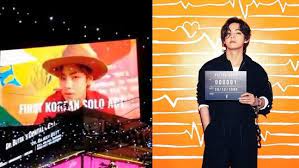 BTS is regarded as one of the most popular bands in the world, with millions of fans worldwide. Their dedicated supporters guarantee that every BTS event is celebrated with tremendous fervour and enthusiasm, and birthdays are considered a huge occasion in the fandom, known as ARMY. V’s 26th birthday is coming, and fans all around the world have begun planning for the big occasion in order to express their love and support for the young artist.

Many Desi fans have taken the initiative to organise unique birthday initiatives in major cities in front of V’s 26th birthday on December 30. Take a look at the photographs and videos below.

An ARMY from Delhi decided to devote an advertising to V ahead of his birthday by placing an LED ad near the city’s Rajiv Chowk station. The advertising displayed the artist’s diverse abilities, and they published a video of it on Twitter with the comment, “V-DAY LED advertisement hoarding in the Heart of India’s Capital, Delhi.” Another Delhi Fanclub went one step farther and set up an outside digital board for the musician.

“Revealing the Ad we have developed for Delhi Outdoor Digital board for Taehyung’s Birthday!” the video was published on Twitter with the description. Thank you to our beautiful Admin S for editing the video CHRISTMAS TREE BY V TODAY”. The Fanclub from Kolkata is next on the list, having built up an LED hoarding in the city for V.

Mumbai was not far behind, with local fan groups taking a similar path and launching a menstrual hygiene project in an effort to overcome the taboo around the matter. For the campaign, the fans teamed up with a group named Myna Mahila. Many people applauded the idea, which also earned money for charity.