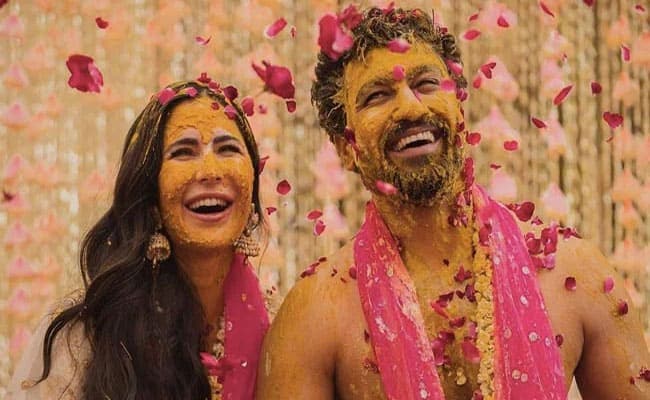 After their spectacular wedding in Rajasthan, Vicky Kaushal and Katrina Kaif have finally published their haldi ceremony photos. The candid photos show the bride and groom applying turmeric to each other while having a good time while their family members do the same.

Vicky posted photos from the haldi ceremony with the caption “Shukr.” Sabr. “Kushi” means “thanks, patience, and joy.” Katrina published more photos from the event with the same description on her Instagram page.

Katrina wears a white lehenga with white floral earrings and a white floral choker. Katrina already has exquisite henna decorations on her hands, indicating that the mehendi ceremony took place before the haldi ceremony. Vicky is dressed in a white kurta pyjama, but he appears to have taken off the tunic and is only wearing a pink dupatta over his neck.

Vicky’s tweet includes a photo of father Sham Kaushal applying turmeric on his arms while still wearing his kurta. Later, the actor takes off his shirt and rubs turmeric all over his body while his buddies pour water over him. He sits comfortably under the pouring water, striking a blue-hued stance. Katrina also appears to be putting turmeric on his cheeks.

Vicky’s mother, Veena, is shown putting turmeric on her face in Katrina’s tweet. In one of the photos, the star is shown getting showered with rose petals while displaying her henna artwork. A photo of Katrina and her mother Suzanne Turquotte sitting together with her sister holding a pink dupatta over their heads is also included. Sunny Kaushal, Vicky’s brother, can be seen cheering them on.

Vicky and Katrina married on December 9 at the Six Senses Fort Barwara in Sawai Madhopur, Rajasthan. A haldi, sangeet, and wedding ceremony were all part of the three-day event. The banquet, which was tightly guarded and attended by filmmaker Kabir Khan, his wife Mini Mathur, and others, drew over 120 attendees.