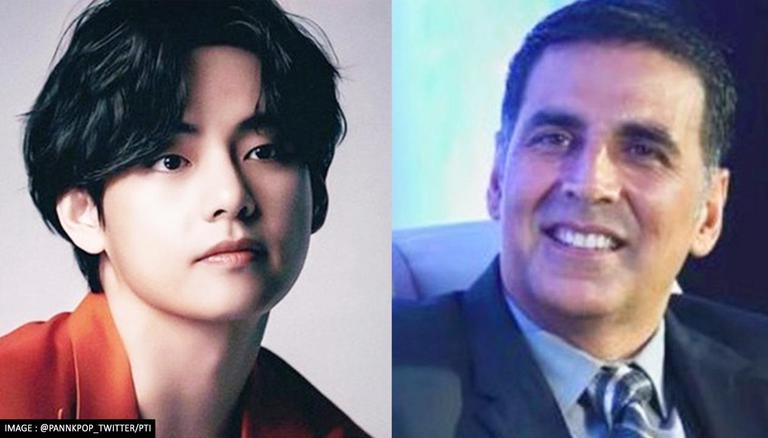 The South Korean boy band BTS’s fan base is now appreciating their artist-made products. The band’s management has arranged the entire month of January by giving each band member four days to debut their own collection. Jin, the band’s eldest member, was the first to debut his line, and his bandmates became models. BTS V came up with the most creative idea for Jin’s collection. While his funny manner wowed followers all over the world, his Indian fans saw a resemblance between him and Bollywood actor Akshay Kumar.

Who’d have guessed BTS’ V and Akshay Kumar share such a striking resemblance? The band’s Indian fans, on the other hand, clearly have a sense of humour and ingenuity, as they came up with one of the funniest crossovers ever. A video of Kim Tae-hyung, or V, wearing Jin’s merchandise was recently published on a BTS fan page. He dressed in a mix of happy and bad mood night clothes. He posed like Raju from Phir Hera Pheri, played by Akshay Kumar. In the video, V and Akshay Kumar have a striking resemblance.

To welcome in the new year and surprise their fans, BTS members came up with the most brilliant plan. The Butter hitmakers will release a custom-made collection for their fans, according to HYBE Merch’s Twitter account. “Artist-made collection,” they claimed on a flyer they uploaded. “We designed stuff that we want to use along with ARMY to express our distinct interests,” the post stated. Jin was the first to show off his goods, followed by RM, the band’s leader. In addition, V, Suga, Jimin, J-Hope, and Jungkook will each release goods.

In his artist-made collection, BTS’ eldest member Jin debuted a set of pyjamas and cushions. The pyjamas were designed by the singer to fit two contrasting moods. The blue pyjamas had Jin’s angel stickers on them for the good days, while the black ones had a devil Jin imprinted on them for the bad days. The stickers were also on the cushions. The BTS products may be found at the Weverse shop.