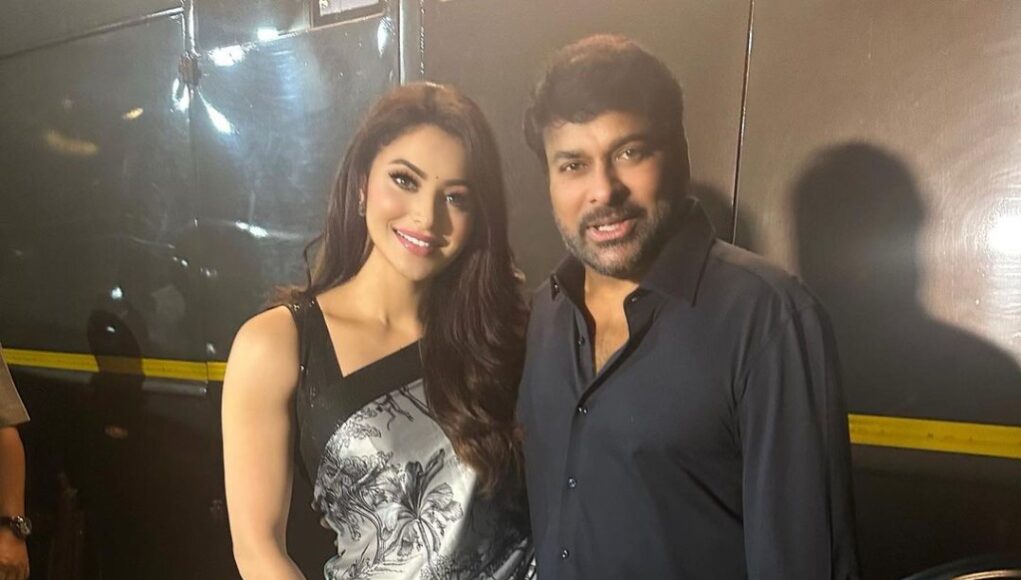 The press meet of Megastar Chiranjeevi’s upcoming film, Waltair Veerayya, took place in Hyderabad, where the entire crew of the film was present, including Ravi Teja. But what caught the attention of everyone present was Chiranjeevi candidly flirting with the gorgeous Urvashi Rautela in front of everyone.

Urvashi Rautela has made a name for herself globally. This star has millions of fans who are mesmerized by her work and her beauty. And now, megastar Chiranjeevi adds on to the list as he was completely swoon in the presence of our boss babe, Urvashi Rautela. In the video, we can see Chiranjeevi blushing and getting currents as he talks and shakes hands with Urvashi. The actor says, “Urvashi has done a fantastic job in Boss Party. It’s wonderful working with her. I didn’t know who was doing the song, but when I got to know it’s Urvashi, I was very excited.”

We can also see Urvashi getting up hearing her praise from the megastar himself and going to shake his hand, and that’s when, Chiranjeevi acted like he got a current as soon as the duo shook hands, and then when offered water, Chiranjeevi said, “My hand got stuck because there’s a magnet not in my hand but in my heart.”

Urvashi attended the press meet in a stunning silver saree with a black floral print and a sleeveless blouse. The actress looked elegant as she paired this desi look with a diamond bracelet, statement studs, and a bindi. Talking about her hair and makeup, the actress opted for a glam makeup look with glossy pink lips, eye drama, blushed cheeks, and kept her hair flowing in soft curls.

Check out the video now,

No matter what, Urvashi makes sure that whenever the actress goes, she grabs the entire limelight, and that is what she did at the press meet that took place in Hyderabad.

On the work front, Urvashi will be seen alongside Ram Pothineni. She will also play Randeep Hooda’s co-star in “Inspector Avinash.” The actress is also making a big Hollywood debut with Michele Morrone on Netflix. In addition to the Hindi adaptation of the hit movie “Thiruttu Payale 2,” the actress will also star in William Shakespeare’s bilingual thriller “Black Rose,” which is based on The Merchant of Venice. In her upcoming global music single, Urvashi will also be seen with Jason Derulo.