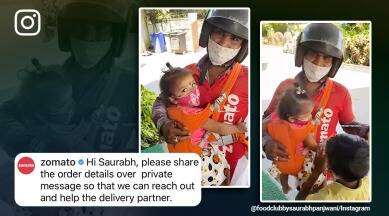 Sometimes people come across items and occurrences that, when taken as a whole, melt the hearts of all the jaded internet users in this world full of hate, struggle, and pessimism. One such touching video of a courageous delivery man has recently gone viral online, helping people realize the strength and willpower that people possess to continue, no matter the circumstances.

The aforementioned video was posted on Instagram by user Saurabh Panjwani and depicts a Zomato delivery partner with his daughter in a baby carrier while wearing a mask. He is heard answering Panjwani’s questions about his name and whether the child is his while grinning and nodding from behind the mask. From behind, a tiny boy bursts into the frame.

Panjwani shows his respect for his commitment to his job, as demonstrated by the fact that he brings his two children to work with him and includes them in his deliveries. He commends him and tells him to keep his baby daughter out of the sun.

“When I saw this, I was really motivated. With two kids, this Zomato delivery partner basks in the sun all day long. We should learn that anyone can accomplish anything if they put their mind to it, remarked culinary blogger Panjwani in the post’s caption.

Already popular online, the video. Over a million people have already viewed the original post from July 31, 2022.

Even Zomato noticed the popular video and left a comment on the page asking Panjwani to share the order information with them privately so they could assist the delivery partner and his kids.

The post’s comment area is overflowing with compliments for the man and his commitment to working hard. Others have praised him for being determined to work through difficulties rather than giving up and complaining, while others have dubbed him a hero and expressed their sadness at how difficult it must be for him to complete his work while simultaneously carrying two young children.

A child is seen embracing and apologizing to his teacher in a viral video.