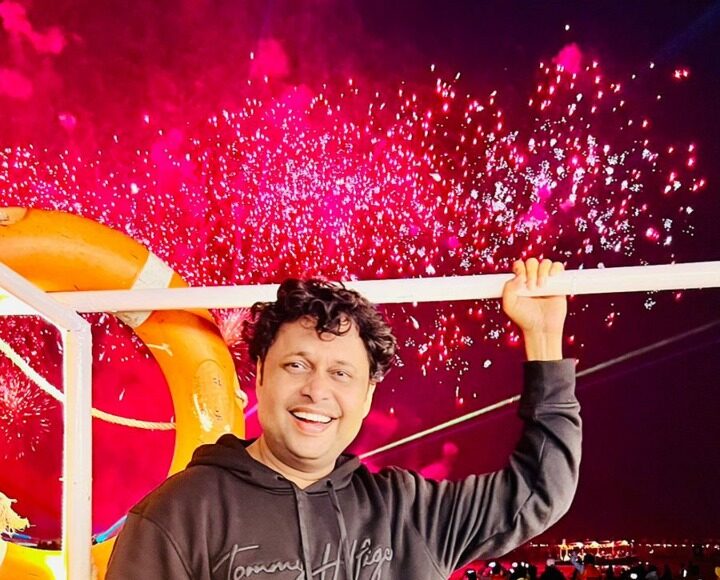 The immensely popular Jodi from &TV’s Happu Ki Ultan Paltan, Daroga Happu Singh (Yogesh Tripathi), and his “Dabangg Dulhania” Rajesh (Kamna Pathak) visited Kashi Nagri to enjoy the local festive fervour of Dev Deepawali, explore several ghats, enjoy boat rides at the banks of the Ganga River, gorge on finger-licking street food, and shop at the city’s famous stores. We caught up with Yogesh Tripathi, from Uttar Pradesh, and spoke to him about his recent visit, his experience exploring the city and meeting his fans and audience.

1. How was your experience visiting Varanasi during Dev Deepawali?
Dev Deepawali is undoubtedly one of the grandest festivals in India, attended by millions across the country. And I believe that everyone from here has witnessed this event at some point in their lives. It is my second visit. I was a teenager when I first saw the celebrations, and it was one of my life’s most memorable and magnificent experiences! I had previously witnessed the Dev Deepawali celebrations at Assi Ghat, and I have to say that it was all worthwhile. Every step of the staircases at Varanasi ghats was glittering with thousands of diyas. The sparkling reflection of Diyas lit across the bank of Ganga created a spectacular and spellbinding view. The sky works were breathtakingly beautiful and a must-see! The entire city appears picturesque and full of positive vibes that day, as if you are in a different world.

2. What was the reason for your visit to Varanasi at this time?
Our show, Happu Ki Ultan Paltan, enjoys a loyal fanbase in Uttar Pradesh, which is why we decided to visit Varanasi, the city of Ghats, to meet and interact with our audience here. Varanasi is one of the oldest cities in India and home to world-famous temples, which attract millions of devotees. We had a great time interacting with our audience during our visit. And what better time than Dev Deepawali, as one can witness unique and mesmerising celebrations! Wherever we travel, our fans greet us with our funny dialogues and my catchphrases, “Arre Dada!” which makes me very happy. I feel grateful to the audience for always appreciating our work, and we wish to continue amusing all our viewers with many more hilarious tracks.

3. Tell us more about your show and your character.
Happu Ki Ultan Paltan is a “Gharelu Comedy” that narrates the escapades of Daroga Happu Singh, his “Dabangg Dulhaniya” Rajesh (Kamna Pathak), an obstinate mother, Katori Amma (Himani Shivpuri), and his nine notorious children. He is a corrupt policeman and keeps demanding a bribe in the name of ‘nyochhavar’ but loves his family very much. My character, Daroga Happu Singh, with the oil-slicked hair that perfectly twirls on his forehead and his goofy paan-stained grin that highlights his typical moustache and his funny potbelly, has made viewers laugh like no other. My character is immensely popular with the audience, and wherever I go, people call out to me as ‘Daroga Happu Singh’ than Yogesh. They even try to replicate my expression fondly and the popular catchphrase Arre Dada! Seeing their love and affection towards my character makes me happy and proud.

4. What do you look forward to most when travelling to a new place?
I would say food, and this trip was no different. Ever since I landed in the city, I made sure to feast on the local cuisine and trust me, even while talking with you, I can feel the taste in my mouth. We gorged ourselves on the city’s delectable treats, such as Tamatar chaat, Litti Chokha, Kulhad Ki Chai, and, most importantly, a variety of sweets such as Rajbhog, Kheer Kadam, and jalebis. I grew up eating these delicacies because I am from the same state and have visited the city many times, but my love for them grows with each bite, and I thoroughly enjoy them every time (laughs).

Television is the all-time entertainment medium

A saree affair: Kamna Pathak’s love for the nine yards!

Anupama: Anupama kicks Pakhi and Adhik out of the house

Mayur Lad: “Bala’s character is a shade of grey. He has a kind heart, but his ways and means are wrong. Playing that layered...