WhizBliz
Home Viral After her kid gifts her a new phone, a woman’s wonderful reaction 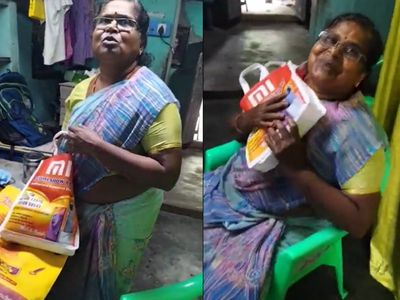 The video depicts a son giving his mother a phone. “The phone inside the bag was worth Rs 8,800, but the joy it brought to my mum’s face is priceless,” the caption reads. Actor R Madhavan was also impressed by the video.

A touching video of a mother’s response to receiving a phone from her son has gone popular on social media. Vignesh, a Twitter user, shared the video. Vignesh captioned the video in Tamil, “The phone inside the bag was worth Rs 8,800, but the delight it brought to my mother’s face is priceless. “We are confident that the video will make you cry.

The boy is seen delivering a bag to his mother and begging her to open it in the 23-second footage. She is taken aback as soon as she glances inside the bag. She runs over to hug her kid tightly. She then sits in the chair, hugging the phone bag.

The video has received more than 6.13 lakh views on the microblogging site. It has over 29,000 likes and 5,900 retweets on Twitter. While the majority of netizens were ecstatic to witness the mother’s reaction, some were moved by the video.

Actor R Madhavan was also impressed by the video. He tweeted, “This bliss has no price.”

“There are no words to describe how I feel,” one person stated. “Though I didn’t comprehend the words, I still feel that sensation,” another commented.

“This is very wonderful,” said a third user. “That’s Unlimited Love,” said another. What are your thoughts on the mother’s response?