WhizBliz
Home Viral Watch a popular video of flamingos flocking to a wildlife refuge in... 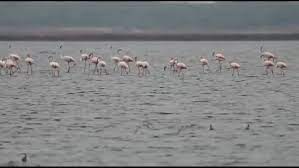 Flamingos are one of the most fascinating birds on the planet. These lovely birds are a treat for birdwatchers all across the world, with their delicate necks and thin legs.

A flock of pink flamingos swimming through a small water body is shown in a viral video on social media. Point Calimere Wild Life and Bird Santuary in Kodiakarai, Tamil Nadu, provided the gorgeous scene.

The attractive and skinny birds give a visual delight as they travel along in a line in the short movie. The pink-coloured birds appear to be migrating and reaching a new location by traversing shallow waterways.

The viral video was released on December 25th and has had about 9,000 views since then.

A lot of people also commented on the video, complimenting the IAS officer for sharing the migrating bird footage.

Others commented that they had went to the nature reserve, which is a great area with a lighthouse and seahorse, and that it was fantastic to see so many flamingos together.

According to News18, the Point Calimere woodland area was designated as a wildlife refuge in 1967. Over the years, the sanctuary’s lagoons have attracted a variety of bird species. Wild boars, horses, and blackbucks also live in the refuge.

Thousands of migratory flamingos arrived to Mumbai last year, during a period when the country was under lockdown due to the coronavirus outbreak.