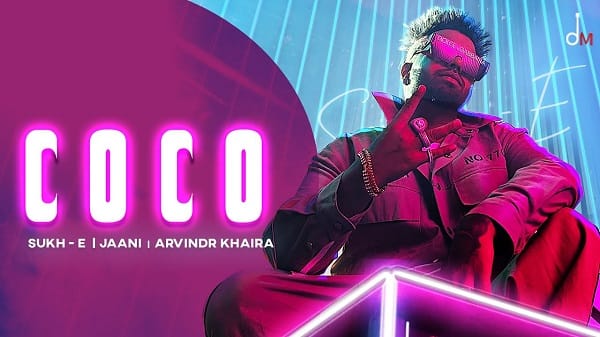 Music plays a very pivotal role in our day to day and when we hear about a new song coming up we all get pumped up to groove on the beats of the song. Sukh-E is one of those singers who constantly redefine his music in its own unique ways. His exquisite music videos and spiffy fashion acted as catalysts in his unprecedented growth.

Sukh-E Muzical Doctorz, the singer behind chart-topping hits like ‘Coka,’ ‘Jaguar,’ ‘Wah Wai Wahh,’ ‘Bamb,’ and ‘Sniper,’ is back with an unbeatable album track ‘Coco.’ The artist turns to be true to his reputation of Muzical Doctorz by crafting an irresistible groove and delivering the catchiest melody ever just in time for the new year celebrations. The music, written and created by Jaani, seems to stick in your head from the first listen, owing to the amusing lyrics.

Talking about his upcoming release ‘Coco’, Sukh-E said, “The core idea of ‘Coco’ was always in my head and I built a scratch version that was sitting in my studio for a long while. I made the hook first and worked backward. Since I had a very particular approach towards it and wanted to give it a unique sound, I kept on trying different things but nothing seemed to hit the mark. Then Avvy Sra and I began experimenting together to figure what direction it could take; the song you listen to now is a result of endless hours in the studio. As always, Jaani paaji did a stupendous job of composing and writing the lyrics that resonate with my artistry as well as my listeners. I can try to describe but I know words cannot do justice to explain how Arvindr Khaira paaji pulled off the stellar music video in a matter of just a few days! It feels amazing to reunite with team Desi Melodies after three long years and create an incredible song like ‘Coco’. I hope our fans and listeners love it as much as we did putting it together!” exclaimed the singer.

Check Out, the song now
https://www.youtube.com/watch?v=Tq3LW8ZQ91w

To those who are unaware, Sukh-E, Jaani, and Arvindr Khaira collaborated on one of the most successful Punjabi songs of all time, ‘Coka,’ in 2019, which has over 500 million views.There are many more songs for all his fans, under the pipeline which will be announced soon