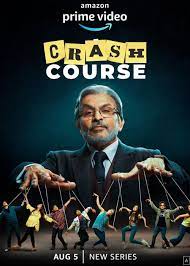 Kota, a city in Rajasthan, is synonymous with its buzzing students prepping hard to crack the IIT JEE and medical entrance exam. Crash Course delves into the lives of students struggling to carve a niche for themselves at IIT and literally, leaving no stone unturned to outdo each other.

Ratanraj Jindal, the man who personifies greed, has risen from poverty and dreams of running his competitors down and renaming the town after himself. Annu Kapoor talks about his character, “He is very cunning and wishes to own every facility in Kota. Also he is harsh and selfish capitalist.”

His main rival is an elderly school-teacher, Arvind Batra. There is a lot of poaching of students and teachers between the two institutes. Both of them use a fixer, Binny Agarwal, who earns his living with commissions from these two.

Crash course, stands far from Kota Factory in realism but it addresses important issues such as student suicides, teenage pregnancy, drugs, love angels and the distractions they face away from home. Student suicides are a harsh reality of the world we live in and this series has done a good job of bringing it to the forefront.

The creator of Crash Course, Manish Hariprasad adds, “Kota Factory is a good show, Arunabh Kumar is a good friend and they have portrayed Kota in their own ways, and we are approaching Kota with a different lens to tell different and numerous stories. If this comparison wasn’t made then I would have felt strange. But I don’t feel that the comparisons will last until the show is released because they are two different stories.”

A 15-day workshop was held for the cast and crew of this show. Streaming on Amazon Prime, watch it!!