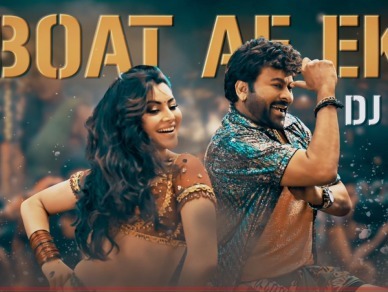 Urvashi Rautela is the youngest superstar in the Bollywood industry and is making her way around the world with her hard work and dedication. The actress’s popularity has been increasing day by day. Urvashi never fails to grab the limelight with her scintillating looks and persona. The actress has made her way into the hearts of the audience because of her intense work and love for acting. Urvashi is making her way in the Tollywood industry as well, and now the actress is going to be seen in Waltair Veerayya. Directed by Bobby Kolli which is an upcoming action entertainer

Boss Party is a full-on masala number where Chiranjeevi is presented as the massiest character offering madness to both fans and movie buffs. Whereas Urvashi has just grabbed the entire limelight in the song with her phenomenal dance moves and scintillating personality. The energy of the duo has just raised the bars high. Urvashi’s sexy dancer look will swoon you off your feet. Along with fans from all over the world, celebrities from Various industries have always been amazed by the Boss Party. Ram Charan took to his Twitter along with various news he appreciated the entire cast of a Boss party for giving such a power pack song to the industry.

Ram Charan appreciated Urvashi and termed her a Blockbuster for her song in Boss Party and also took to his Twitter handle and appreciated everyone for their performance. “#BossParty SUPER fresh & MASS! Adirindhi ‘, exlcaims Ram Charan.

The song is something that is going to be stuck in our minds because of its beats and lyrics. The lyrical video looks very catchy to our eyes as it is shot in a aesthetic old location. The two flaunt their dance moves in this vibrant number composed by Devi Sri Prasad. Nakash, Aziz, DSP, and Haripriya crooned the song. ..

Reacting to the song, one netizen wrote, “amazing dance”, and another wrote, “she is the best.” “Megastar chiru with Urvashi waiting.” Wrote another one. The song is trending at No 1 worldwide.

The Sankranthi holiday will see the release of Waltair Veerayya, which will compete at the box office with a number of other films.