WhizBliz
Home Viral Anand Mahindra is ‘awestruck’ by the viral video of a double amputee... 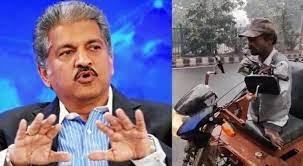 Anand Mahindra offered him a job after a viral video of a quadruple amputee driving a customised car in Delhi attracted his attention on Monday.

The man in the undated video shows how he rides the vehicle and spins it with his torso. The orange-coloured vehicle is equipped with a two-wheeler motor. He claims to have two children, a wife, and an elderly father at home, and that he has been driving for five years.

“I got this today on my timeline. I’m not sure how old it is or where it came from, but I’m in awe of this man who has not only confronted his challenges, but is appreciative for what he has. “Ram, can you make @Mahindralog MLL a Business Associate for last-mile delivery?” Mahindra tweeted, tagging Mahindra Logistics and requesting Rampraveen Swaminathan, the logistics company’s Managing Director and CEO, for help.

Mahindra Logistics responded to Anand Mahindra, calling the quadruple amputee a “superhero” and said that they are attempting to locate him.

“Of course, Anand!” We’re doing all we can to find him as soon as possible. He’ll be a valuable addition to our country’s supply chain. “A genuine Superhero.”

Anand Mahindra, a 66-year-old businessman with over 8.6 million Twitter followers, is one of the few Indian business leaders who uses the social networking site. Last month, he helped a Manipur kid get a better education after he fashioned an Iron Man outfit out of junk. The teen’s video, which Mahindra posted in September, went viral, garnering over 1.41 lakh views.