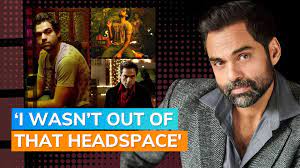 Dev D is one of my favorite Bollywood movies and Abhay Deol has does a fabulous job in it. The Dev D star has currently acted in the Netflix series ‘Trial by Fire’.

Recently Abhay Deol bared his heart out about being a part of this glamorous Bollywood industry and how he hated fame as a child.

In an interview, he said, “I grew up in a filmy family. I saw fame up close as a child. I don’t like it because your privacy goes away. A lot is written about you. I used to literally hate fame and the media. Because growing up I saw a lot written about family. Being questioned as a kid, ‘Is it true, is that true?” It used to make me angry. ‘Your farther works in films, your uncle is a big star.’ Obviously, whatever was written about them, I was asked in school. I just didn’t like that. I saw a lot of people around family who I knew were there to gain benefits, they weren’t friends.”

Talking about the time when he was in New York, Abhay said, “The Dev D role I did, I wasn’t out of that headspace. So for one year, I did what Dev D did in the film. I have a little more better than Dev. I wasn’t in tattered clothes in the streets. I drank everyday like a fool. I made some very good friends, so I remember some things. My whole life is a daze.”