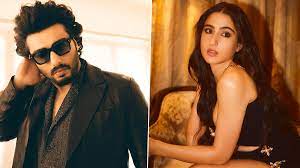 Arjun Kapoor has been in talks with Homi Adajania, to feature in his next venture and Sara Ali Khan is also being roped for the same.

As per the industry report, “Yes, Homi Adajania is working on a new venture, and has been in talks with Arjun Kapoor and Sara Ali Khan to headline the cast. As for the film, titled Murder Mubarak the film will likely be a horror-comedy or something on those lines.”

To further elaborate on the cast, our source says, “Both Arjun and Sara are in talks with Homi for his next. Though neither of them has signed the so-called dotted line yet, both have expressed interest in the script and premise of the film. Currently, Homi is in the process of finalizing the finer details, after which both Arjun Kapoor and Sara Ali Khan will officially be part of the project. Post this the makers will release an official statement of the film.”

The movie will release in 2024 and the plot is not known yet. Arjun will next be seen in The Lady Killer and Meri Patni Ka Remake. Sara has Gaslight, Ae Watan Mere Watan and Jagan Shakti’s next. Another cool project up her sleeve is Nakhrewali, where she’ ll be seen opposite Sunny Kaushal.