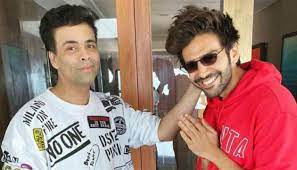 Since the trailer of Kartik Aaryan’s Shehzada, the entire social media is going abuzz with his cool action avatar in the trailer. The industry’s renowned producer and director Karan Johar is also majorly impressed with the trailers powerful entertainment quotient. The two had a fall out of sorts after Kartik dropped out of Karan’s ‘Dostana 2’ co-starring Janhvi Kapoor.

Kartik Aaryan’s fans have going berserk seeing the trailer. His cool looks, superb dialogue delivery and swag have fans swooning over his performance.

Directed by Rohit Dhawan, ‘Shehzade’ is an official remake of Telugu blockbuster movie ‘Ala Vaikunthapurramuloo.” With this movie, Kartik has added another feather to his cap by marking his debut as producer. He says, “I am an actor first. Every film including ours goes through some problems during the making, which need to be ironed out. And I have always wanted to be a part of every film I work in holistically not just an actor. I want to be involved in making the film in every way possible. I am always all in for every film. As far as the producer credit goes, Shehzada is the effort of its producers, they have chosen to give me credit and make me a part of it. I am humbled. But all credit for making and producing the film goes to the producers.”